We overview the datasets released through NLB (thus far only those in NLB’21). Technical details and the dataset itself are provided in the linked DANDI repository and the associated paper. In NLB’21, we release a collection of four datasets spanning a variety of tasks and brain areas. Though in our benchmark we are only evaluating a specific set of metrics for each dataset, we encourage the use of these datasets beyond the scope of our current competition. 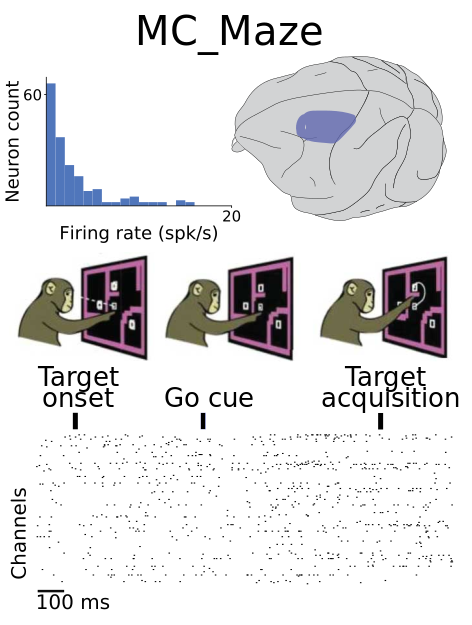 The maze task is a delayed center-out reach task with barriers, resulting in a variety of straight and curved trajectories. Neural activity was recorded from the dorsal premotor and primary motor cortices, and cursor, monkey gaze position, and monkey hand position and velocity are also provided.

It has been found that M1/PMd activity during such planned, highly-stereotyped movements is predictable from neural population state at movement onset. Though this does not imply the neural system is itself autonomous, predictability makes the dataset useful for evaluating a method’s ability to model autonomous dynamics. In addition to a standard session, we provide 3 recording sessions (standard, large, medium, and small) with varying numbers of trials in order to test how modeling methods scale to limited data.

The 4 recording sessions we are releasing are provided by Matt Kaufman, Mark Churchland, and Krishna Shenoy at Stanford University. 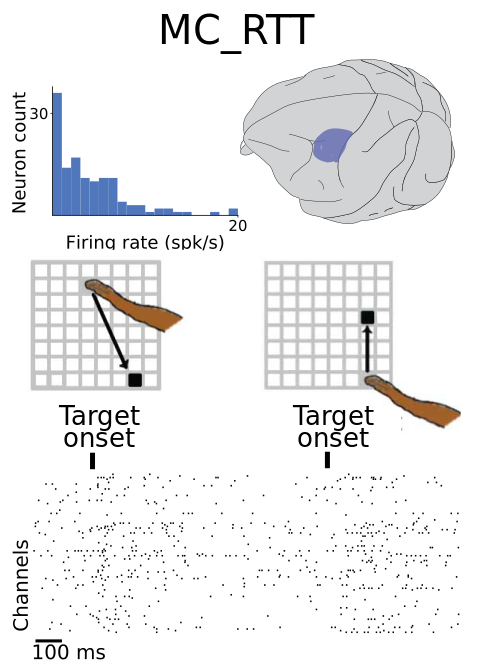 The random target task is a self-paced, sequential reaching task between random elements of a grid. The dataset includes neural spiking data from the primary cortex along with simultaneously recorded monkey finger position, cursor position, and target position.

The unique task design results in the absence of pre-movement delay periods and repeated, highly constrained reach conditions typical of other reaching tasks. The ability to accurately model motor cortical activity during this more naturalistic behavior, and not only highly-stereotyped reaches with preparatory periods, is vital to developing effective BCI decoders and understanding the functioning of the motor cortex.

We are releasing a single recording session for this dataset, provided by Joseph O’Doherty from his time at University of California San Francisco. 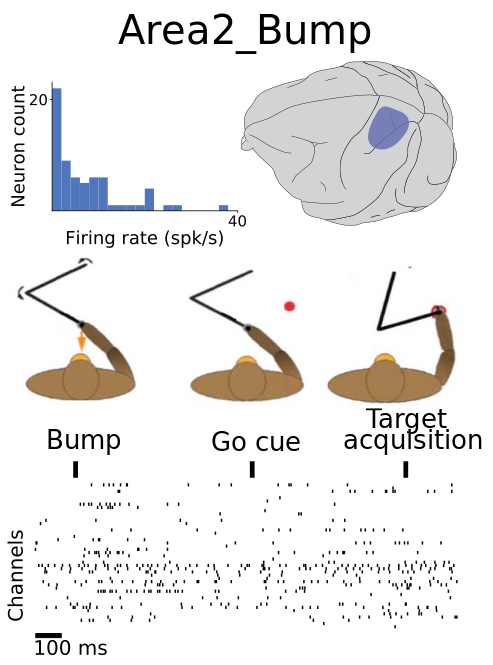 The bump task resembles a standard center-out reaching task, but on a portion of the trials, the monkey’s arm was bumped before the reach. Neural activity was recorded from Brodmann’s area 2 of the somatosensory cortex, and the dataset also includes position, velocity, and acceleration of the monkey’s hand, force between the monkey’s hand and the manipulandum, and monkey muscle length & velocity and joint angle & velocity.

Area 2 is robustly driven by mechanical perturbations to the arm and has been shown to contain information about whole-arm kinematics. Thus, this dataset provides the challenge of modeling input-driven activity in response to both predictable and unpredictable sensory feedback, in contrast to the largely autonomous dynamics of the motor cortex during reaching tasks.

We release a single recording session for this dataset, provided by Raeed Chowdhury and Lee Miller at Northwestern. 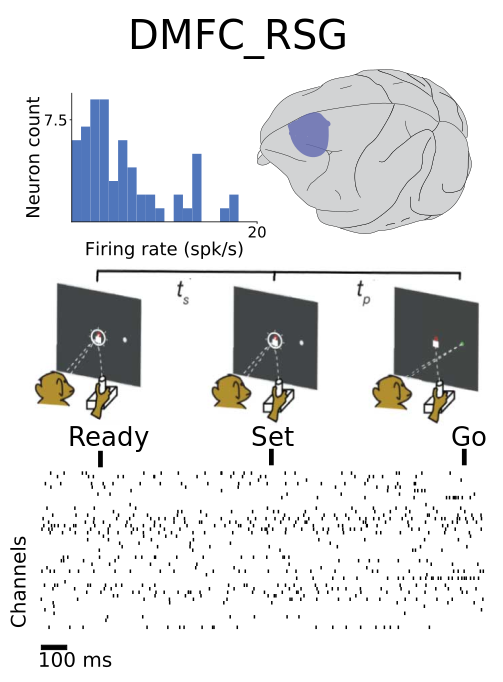 The ready-set-go task is a cognitive timing task in which the subject is presented with two stimuli (Ready followed by Set) separated by a certain time interval. The subject then attempts to perform an action (Go) such that the interval between Set and Go matches the interval between Ready and Set. Neural activity was recorded from the dorsomedial frontal cortex, which is associated with higher-level functions like motor control and timing.

Unlike the motor cortex or somatosensory cortex, which are primarily driven by either internal dynamics or inputs, activity in the DMFC is strongly dependent on both and is involved in complex tasks that do not have clear moment-by-moment external behavioral correlates. As a result, the DMFC_RSG dataset presents unique challenges in both modeling this complex activity and evaluating the resulting predictions.

We are releasing a single recording session for this dataset, provided by Hansem Sohn and Mehrdad Jazayeri at MIT.